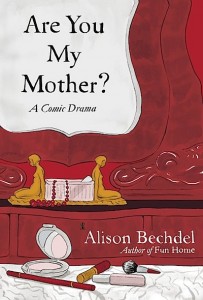 Alison Bechdel – author, illustrator and LGBT role model – has followed up her critically acclaimed graphic novel Fun Home with Are You My Mother? – a story which focuses on Bechdel’s relationship with her mother.

According to the press release, the novel is “a second thrilling tale of filial sleuthery, this time about her mother: voracious reader, music lover, passionate amateur actor. Also a woman, unhappily married to a closeted gay man, whose artistic aspirations simmered under the surface of Bechdel’s childhood… and who stopped touching or kissing her daughter goodnight, forever, when she was seven.”

Demand for Bechdel’s latest is high, which has resulted in an initial print of 100,000 – one of the largest first printings ever made for a graphic novel.

Are You My Mother? will be released on May 1st (along with an e-book edition) and will include a national book tour by Bechdel that will include New York, Washington D.C., Vermont, Miami, San Francisco, Seattle and Portland.