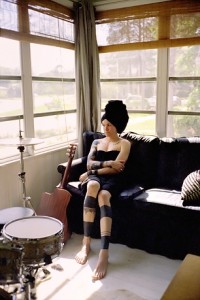 In a revealing new interview with Rolling Stone magazine, the lead singer of punk band Against Me! has decided to publicly come out as transgender, and says that she plans to start the transitioning process soon. 31-year old Tom Gabel, who is married with a 2-year-old child, talks candidly in the interview about her struggle with gender dysphoria, and her fears about coming out to her wife.

“For me, the most terrifying thing about this was how she would accept the news,” Gabel said. “But she’s been super-amazing and understanding. I’m going to have embarrassing moments, and that won’t be fun.” The singer added, “But that’s part of what talking to you is about – is hoping people will understand, and hoping they’ll be fairly kind.”

Gabel will soon go by the name Laura Jane Grace, a name that she mentioned in a song called “The Ocean” from their 2007 debut album.

“And if I could have chosen, I would have been born a woman/My mother once told me she would have named me Laura/I’d grow up to be strong and beautiful like her/One day, I’d find an honest man to make my husband.”

Against Me! started recording its latest album, Transgender Dysphoria Blues, earlier this year and are scheduled to go on tour with The Cult at the end of this month.

GLAAD President Herndon Graddick released a statement saying “Tom’s decision to live life authentically is a not only a personal step forward, but one that will advance the national discussion about treating transgender people with fairness. As more and more Americans get to know people who are transgender, they’re coming to embrace and celebrate them.”

We applaud Laura for her bravery and strength, and hope that her courage paves the way for further acceptance and love towards the trans community.