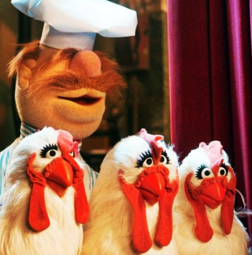 The Muppets have always believed in fairness, love and equality, so it’s no surprise that their creators, the Jim Henson Company, have decided to sever all business ties with the anti-gay fast food chain.

Chick-Fil-A has already been in the news this past year when it was discovered that the company has donated millions of dollars to anti-gay Christian groups. But recently, in an interview with the Baptist Press, Chick-fil-A CEO Dan Cathy was asked if he was opposed to marriage equality and he responded, “Guilty as charged. We are very much supportive of the family — the biblical definition of the family unit. We are a family-owned business, a family-led business, and we are married to our first wives. We give God thanks for that. We know that it might not be popular with everyone, but thank the Lord, we live in a country where we can share our values and operate on biblical principles.”

The Jim Henson Company made their announcement on its Facebook page on Friday:

“The Jim Henson Company has celebrated and embraced diversity and inclusiveness for over 50 years and we have notified Chick-Fil-A that we do not wish to partner with them on any future endeavors. Lisa Henson, our CEO is personally a strong supporter of gay marriage and has directed us to donate the payment we received from Chick-Fil-A to GLAAD.”

Let’s hope other companies follow the Muppet’s example. The mayor of Boston, Thomas Menino, has also recently made the statement that “Chick-fil-A doesn’t belong in Boston. You can’t have a business in the city of Boston that discriminates against the population. We’re an open city, we’re a city that’s at the forefront of inclusion. That’s the Freedom Trail. That’s where it all started right here. And we’re not going to have a company, Chick-fil-A or whatever the hell the name is, on our Freedom Trail.”