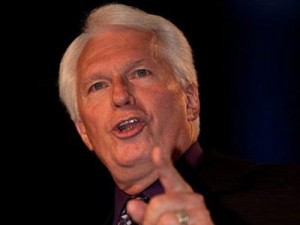 Bryan Fischer of the American Family Association has sparked a media firestorm after tweeting that the children of gay couples should be taken away via an “Underground Railroad.”

On his talk show earlier this week, he also said, “The only way now in America’s legal system that you can protect your child from being raised in a same-sex household is to get that kid into the Underground Railroad and get that child out of dodge.”

Fischer also linked to a story about a priest charged with assisting to abduct the daughter of a lesbian couple. LGBT organizations were quick to denounce Fischer’s comments.

“He is quite literally comparing his desire to take children from homes with same-sex parents to the heroic events that led to the freeing of slaves,” wrote Jeremy Hooper, Special Projects Consultant for GLAAD. “This man has declared rhetorical war on LGBT families. It’s time to hold him accountable!”