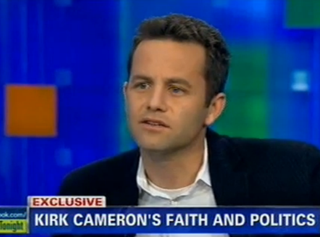 Decades ago, Kirk Cameron, the evangelical Christian bigot, experienced a flash of fame when he starred on Growing Pains – a lackluster 80’s sitcom. Since then, he has devoted his life to his faith, even producing and starring in direct-to-video quality Christian-themed movies about the Rapture.

For some reason, this makes him someone that Piers Morgan wanted to interview this past weekend, and someone whose opinion on homosexuality CNN thought was valid enough to air.

“I think that it’s unnatural. I think that it’s detrimental and ultimately destructive to so many of the foundations of civilization.Marriage is almost as old as dirt, and it was defined in the garden between Adam and Eve. One man, one woman for life till death do you part. So I would never attempt to try to redefine marriage. And I don’t think anyone else should either,” Cameron said. “So do I support the idea of gay marriage? No, I don’t.”

The Gay & Lesbian Alliance Against Defamation was fast to reply. “In this interview, Kirk Cameron sounds even more dated than his 1980s TV character. Cameron is out of step with a growing majority of Americans, particularly people of faith who believe that their gay and lesbian brothers and sisters should be loved and accepted based on their character and not condemned because of their sexual orientation.”

Kirk also shared his archaic and repulsive views on abortion – saying that even in the case pregnancy from rape or incest, that abortion should never be an option, even remarking that if that were to happen to his daughter, he would “help” her through the ordeal, but that he would expect her to carry to term the “little creature made in God’s image.”