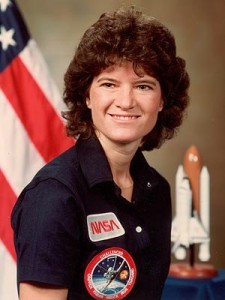 Sally Ride, the first American woman in space, passed away this week after a 17-month battle with pancreatic cancer. She was 61.

Ride signed up to be a NASA astronaut in 1977 – the first time NASA allowed women in space – and was chosen the next year. According to The Advocate, it’s unlikely that Ride was openly gay at the time, as NASA probably would not have allowed openly gay astronauts. Ride was married to fellow astronaut Steven Hawley for part of her NASA career.

In 1983, Ride was part of the Challenger mission, making her the first woman to go into space. She would take another Challenger trip in 1984 and retired from NASA in 1987 to eventually become a college professor. She quickly became an icon for young girls everywhere seeking professions in science, though many may not have been aware she would become an LGBT icon as well.

Ride is survived by her female partner of 27 years, Dr. Tam O’Shaughnessy, a professor emerita at San Diego State University. The two met when they were 12 and became partners in 1985. Ride was open about their partnership and it was apparently never a source of controversy.

Thanks for inspiring us, Sally.