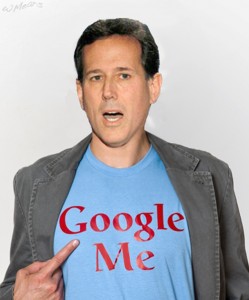 Rick Santorum just did very well with Iowa’s Republican electorate, virtually tying Mitt Romney for the win. The GOP seems to be narrowing down their choice to a puritanical Christian zealot or, a tight-lipped Mormon. Rick Santorum made LGBT headlines years ago, when he likened homosexuality to bestiality, saying “In every society, the definition of marriage has not ever to my knowledge included homosexuality. That’s not to pick on homosexuality. It’s not, you know, man on child, man on dog, or whatever the case may be. It is one thing.”

Since then, Santorum has stained our ears with more ignorance than one would think possible, even from a right-wing conservative nutjob. Here are a few nuggets of anti-wisdom from the now very real contender for leader of the Republican party.

In an interview Lara Jakes Jordan,when asked for his position on the Roman Catholic Church sex abuse scandal, Santorum said that the scandal involved priests and post-pubescent men in “a basic homosexual relationship” (not child sexual abuse), which led the interviewer to ask if homosexuality should be outlawed. To which he replied that “sodomy laws properly exist to prevent acts which “undermine the basic tenets of our society and the family.”

On Gays in the Military:

“They’re in close quarters, they live with people, they obviously shower with people.”

Gays shower with PEOPLE. You know, because gays aren’t people.

“Is anyone saying same-sex couples can’t love each other? I love my children. I love my friends, my brother. Heck, I even love my mother-in-law. Should we call these relationships marriage, too?”

“This is an issue just like 9-11. We didn’t decide we wanted to fight the war on terrorism because we wanted to. It was brought to us. And if not now, when? When the supreme courts in all the other states have succumbed to the Massachusetts version of the law?”

And to round things out, here are his thoughts on some other issues:

It’s “junk science“; and a “beautifully concocted scheme” by the political left and “an excuse for more government control of your life.” He backs and would support a policy of “drill everywhere” for oil and that there is “enough oil, coal and natural gas to last for centuries.”

“One of the things I will talk about, that no president has talked about before, is I think the dangers of contraception in this country. It’s not okay. It’s a license to do things in a sexual realm that is counter to how things are supposed to be.”

On Making ‘Black People’s Lives Better’ With ‘Somebody Else’s Money”:

“I don’t want to make black people’s lives better by giving them somebody else’s money. I want to give them the opportunity to go out and earn the money and provide for themselves and their families.”

“In far too many families with young children, both parents are working, when, if they really took an honest look at the budget, they might find they don’t both need to. … What happened in America so that mothers and fathers who leave their children in the care of someone else — or worse yet, home alone after school between three and six in the afternoon — find themselves more affirmed by society? Here, we can thank the influence of radical feminism.”

On People’s Hopes and Dreams for their Future:

“The idea is that the state doesn’t have rights to limit individuals’ wants and passions. I disagree with that. I think we absolutely have rights because there are consequences to letting people live out whatever wants or passions they desire.”

“Suffering, if you’re a Christian, suffering is a part of life. And it’s not a bad thing, it is an essential thing in life … There are all different ways to suffer. One way to suffer is through lack of food and shelter and there’s another way to suffer which is lack of dignity and hope and there’s all sorts of ways that people suffer and it’s not just tangible, it’s also intangible and we have to consider both.”

These are just a few of the shockingly backwards thoughts that Santorum feels are worthy of saying aloud. Rick Santorum is a frothy mixture of hate, bigotry, and ignorance who needs to be exposed for the dangerously simple-minded fool that he is.