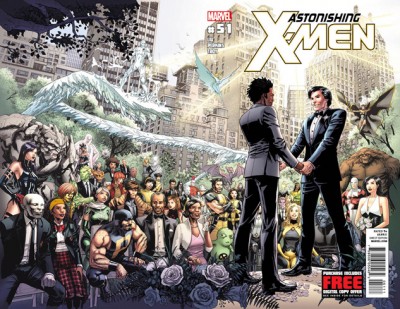 Northstar came out as gay in Alpha Flight #106 in 1992, paving the way for other gay characters like DC Comics’ lesbian heroine Batwoman, outed in her 2006 reappearance as Kate Kane, or DC’s Green Lantern, who came out as gay earlier this year. Northstar and Kyle’s wedding even inspired a New York City comic book store to hold an in-store same-sex wedding on the day of the comic’s release. Scott Everhart, 39, and Jason Welker, 33, were chosen from more than 50 applicants to marry at Midtown Comics on June 20 to celebrate the release.

On deciding whether Northstar and Kyle should tie the knot, Astonishing X-Men writer Marjorie Liu said: “Northstar’s storyline was part of an ongoing discussion about where to take our characters next. I find a useful way of evolving a character is through his or her defining relationships — and what’s more defining than a relationship with someone you love? Northstar and Kyle have been together for a while now, and rather than keep them in relationship limbo (or create some artificial strife), why not bring up marriage? Why not let them take that next step, which will create a far richer field for stories?”

She continued: “I feel intimidated any time I start writing a new story, but this was a special situation given that gay marriage, whatever your view, is an issue that affects a huge number of people in the United States and elsewhere.”