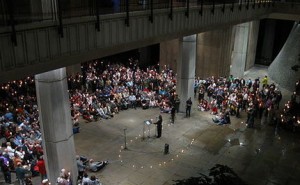 A community is still healing after a lesbian woman in Lincoln, Nebraska was attacked in an anti-gay hate crime.

The woman, whose identity is being kept private but who identifies as openly lesbian, says three men in masks came into her home, bound and gagged her, and carved gay slurs into her skin with knives. They then doused gasoline around her house and set it on fire.

She was able to escape to a neighbor’s house and call the police, and her home was not substantially damaged from the fire. Though initially hesitant to do so, police have officially classified the attack as a hate crime.

More than 500 people attended a candlelit vigil for the woman on Sunday. In support of the woman, the mayor of Lincoln, local LGBT organizations, and countless community members have publicly denounced hate crimes and expressed their commitment to ending violence directed at anyone.