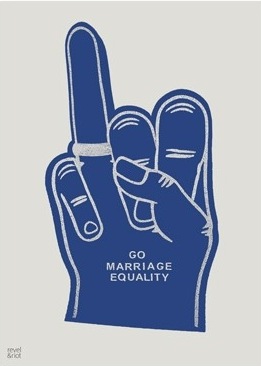 Support for gay marriage is at an all-time high amongst the American people, just a couple weeks after President Obama announced his support for it. The most recent poll conducted by the Washington Post shows that 53% of US citizens think that same-sex marriage should be legal. The most exciting thing about that number is that it has increased from just 36% only 6 years ago.

A lot of this has to do with the fact that more LGBT people are coming out to their friends, family and coworkers. 71% of those who took the poll say they have a friend, family member or acquaintance who’s gay, and that number is up from 59% in 1998.

From the full document that gets into the details of the poll (read it here):

Among other groups, support for gay marriage reaches 69% among adults under age 30 (with 51% “strong” support), compared with just 38% of seniors. (Half of seniors are strongly opposed). Support is also 14 points higher among college graduates than among non-graduates, 63% to 49%. But it’s the same, 53%, among men and women alike.”