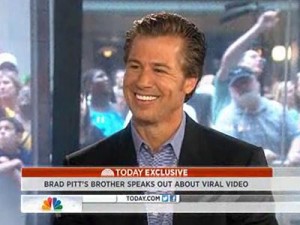 Brad Pitt’s family had LGBT media fired up throughout the weekend after Jane Pitt, mother of the actor and gay ally, wrote an angry letter to a Missouri newspaper denouncing President Barack Obama.

In a letter published to the News-Leader’s website on July 3, Mrs. Pitt wrote: “Any Christian who does not vote or writes in a name is casting a vote for Romney’s opponent, Barack Hussein Obama — a man who sat in Jeremiah Wright’s church for years, did not hold a public ceremony to mark the National Day of Prayer, and is a liberal who supports the killing of unborn babies and same-sex marriage.”

Brad Pitt’s brother Doug appeared on MSNBC’s Today this week to discuss his new commercial for Virgin Mobile and seemed to support his mother’s outburst – or at the very least, he did not say anything to counter his mother’s homophobic message.

“Moms and dads and kids agree to disagree all over the world, so why would our family be any different,” Doug Pitt said. “There can be healthy discussion when people disagree with you and I think there should be. The bad thing is when it turns to venom and negativity, and we don’t have that in our family. It’s open discussion, we can learn from each other. If anything, it solidifies your point or maybe you learn something.”

Brad Pitt, together with partner Angelina Jolie, is an outspoken LGBT rights advocate. So far it seems he is the only Pitt we can look to for supportive actions.