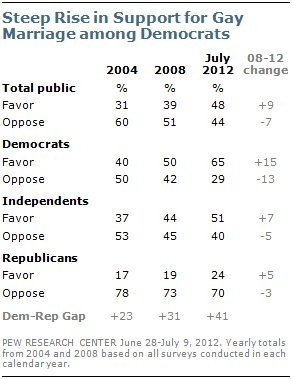 A new poll from the Pew Forum on Religion and Public Life has confirmed what we have thought to be true for a while: support for marriage equality is going up nearly across the board.

The poll shows jumps in support from Democrats, Republicans and Independents. Republicans remain the group most opposed to marriage equality, though African-Americans did not show promising levels of support either. A surprisingly high percent of Hispanic Catholics also reported support for same-sex marriage.