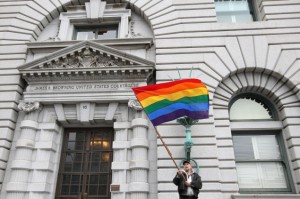 In November of 2008, the people of California were asked to vote on whether or not LGBT citizens deserved equality, even though the state had already granted LGBT people the right to marry, five months earlier.

Fundamentalist, out-of-state anti-gay groups went to work, designing and paying millions for a campaign of bigotry that resulted in the successful passage of Proposition 8 – a ballot measure that inserted the one man-one woman provision into the California Constitution, thereby overruling the court’s original decision.

A three-judge panel of the 9th U.S. Circuit Court of Appeals ruled 2-1 that a lower court judge correctly interpreted the U.S. Constitution and Supreme Court precedents when he declared in 2010 that Proposition 8 was a violation of the civil rights of gays and lesbians.

“Although the Constitution permits communities to enact most laws they believe to be desirable, it requires that there be at least a legitimate reason for the passage of a law that treats different classes of people differently. There was no such reason that Proposition 8 could have been enacted,” the ruling states. “Proposition 8 serves no purpose, and has no effect, other than to lessen the status and human dignity of gays and lesbians in California, and to officially reclassify their relationships and families as inferior to those of opposite-sex couples.”

Gay marriages cannot resume in California until the deadline passes for Proposition 8 sponsors to appeal. If an appeal is filed, gay marriages will remain on hold until it’s resolved. Naturally, the lawyers for Proposition 8 sponsors have said they will appeal to a larger panel of the court and then the U.S. Supreme Court if they did not receive the ruling they wanted from the 9th Circuit.