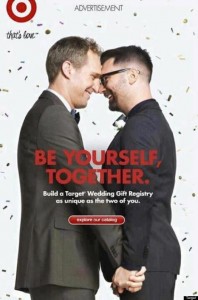 Target has been working hard to win over the LGBT community since it faced backlash in 2011 for indirectly donating to an anti-gay gubernatorial candidate. In this latest move, the retailer has released an ad for its wedding registries featuring a gay couple.

The ad shows two men in suits holding hands with eyes locked on each other behind the words “Be Yourself, Together.” In the past few months, Target has also released a line of t-shirts for Pride month as well as greeting cards designed for weddings of same-sex couples.

There’s no telling whether this slew of pro-gay actions will make up for past hurts, but in the words of David Badash of The New Civil Rights Movement, the registry ad is “kinda awesome.”