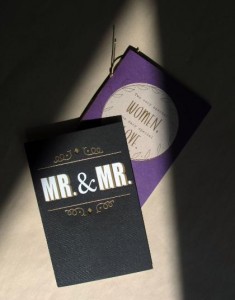 Same-sex marriages are only recognized in a handful of places, and now Target is one of them. Sort of.

Last month the major retailer began selling greeting cards designated for same-sex weddings. Bearing sweet messages like “Mr. and Mr.” and “Two very special women, one very special love,” the cards are made by Carlton Cards, a division of American Greetings. They aren’t the first of their kind, either – Hallmark has produced same-sex wedding cards since 2008.

Target’s stance on LGBT rights has been iffy. In 2010 the retailer donated $150,000 to a Minnesota political group that supported a staunchly anti-gay candidate for governor, but this year the store sold t-shirts for Pride month and donated a portion of proceeds to the Family Equality Council.

Skeptics have also wondered whether the store’s decision not to carry Frank Ocean’s debut album Channel Ocean stems from the CD’s early release on iTunes, as spokespeople have claimed, or because the artists came out as bisexual earlier this month. Target has also not made known its official stance on marriage equality.

Target spokeswoman Molly Snyder said the retailer aims to appeal to a variety of audiences, including LGBT people. “Target is focused on diversity and inclusivity,” she said.