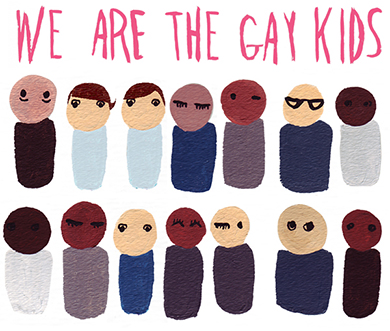 Internationally acclaimed musicians and gay-rights advocates, Tegan and Sara have been touring their latest record “Heartthrob” across many continents this past year. Deeply connected to their audience Tegan and Sara meet with fans at every show, and receive loads of mail every night that they collect at their merch table mailbox. Letters, cards and drawings give them a glimpse into the lives of the people who listen to and love their music, many of whom are LGBT and share their stories of struggle and inspiration. Sara responds with appreciation and reflections on progress in the fight for LGBT equality worldwide.
_______________
Friends,
This year we have spent time in many countries we have never toured before. Many do not have legislation that protects or even acknowledges the rights or existence of gay and transgendered people. Our fans in those cities and countries are so very much like those everywhere we go in the world. Some of those people, kids who look just like we do, are afraid to associate with our band because of the implication. Imagine it being a risk to attend a Tegan and Sara concert?
In a time where many countries are defending and protecting gay and transgendered people, the majority still chooses exclusions and discrimination, sometimes even violence or death. I have the deepest respect for those who in any way helped us get to those countries, set up those shows, or bravely attend those amazing concerts. Specifically, the generosity we were shown on this last tour of Eastern and Central Europe was overwhelming. Our recent experiences have only strengthened our resolve to stand with those fighting for LGBTQ rights internationally.

I have been thinking about the beginning of our career and what it felt like to talk about being gay when we first started doing interviews with the press in 1999. I remember questions about our sexuality always starting with;

“I’m sorry to ask you this…””I know you don’t like to talk about it, but…””I don’t think its important to your music that you’re gay but I was wondering…”It always made me impatient and defensive. At that time there weren’t very many people in the music industry who were talking about being gay unless they were coming out or asking people to butt out. Despite a small number of trailblazers, there were very few examples with whom we could closely identify. Often during that time we were tasked with explaining to straight journalists how anyone who wasn’t a gay woman could relate to our music. Our confidence and irritation when discussing our identity was perhaps partially our fault. We wanted to own it, but had yet to understand it. I still associate knots of fury and sadness with that early press about our band.

At some point I sensed a change. We had figured out a way to share the complex and inspiring experience of being gay without it feeling reductive or isolating. Our success as musicians changed the spin of the story. There was relief during the press cycle for “The Con” when writers suddenly wanted to talk about our songwriting, the process of recording, and the dynamics and depths of our collaborative relationship. Of course our being gay (and the audience who embraced that) was still of interest but it did feel that we had entered a new era of our career. It was fun to talk to the press! Even enjoyable!

I’m grateful that there has been so much progress made internationally in the fight for LGBTQequality and being in this band has allowed us to experience that change personally all over the world. Our fan base is one of the most kind and understanding and their acceptance has allowed for a deeper love of ourselves. The correspondence we receive from them each night is often heart-wrenching and brave.  I wake up daily to op-ed pieces and blogs written by impassioned and influential women (both straight and gay) that make me feel less alone. There is a vibrant community of queer friends and artists who share the experience of being proudly out and accepted widely but not negatively impacted or marginalized commercially.

Today, when a journalist from any country starts a questions with;

I feel proud to speak about our identity and how that has positively shaped our music and our career.
We have been once again humbled by the self-respect and perseverance those in the LGBTQcommunity possess even in places where one could easily lose confidence and I hope that they find strength knowing we are a part of that community and we will stand with them until this bullshit changes everywhere.