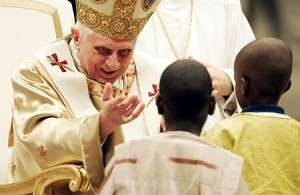 Pope Benedict XVI gave a speech yesterday to diplomats from 180 countries, and in it, made some of his most anti-gay statements to date. According to Reuters, the Pope said “pride of place goes to the family, based on the marriage of a man and a woman” when discussing appropriate “settings” for children. This is coming from the leader of the Catholic Church, an institution that has paid out over $1,000,000,000.00 in legal fees and damages to victims of sexual abuse by priests.

When referring to straight marriage, he said: “This is not a simple social convention, but rather the fundamental cell of every society. Consequently, policies which undermine the family threaten human dignity and the future of humanity itself.”

He went on to say: “The family unit is fundamental for the educational process and for the development both of individuals and states; hence there is a need for policies which promote the family and aid social cohesion and dialogue.”

In case you’re unfamiliar with this Pope, he’s the one who was in charge during a cover-up in the Archdiocese of Munich in Germany the 1980s, when he transferred a suspected pedophile priest who had allegedly forced an 11-year-old boy to engage in oral sex. The priest was secretly transferred (not legally charged) to Munich for “therapy.” That same priest was later convicted of sexually abusing minors after he returned to being a working priest in another town.

He also has some thoughts about safe sex, as he has stated on numerous occasions, the traditional teaching of the Church that condoms are not seen as a “real or moral solution” to the HIV/AIDS pandemic.