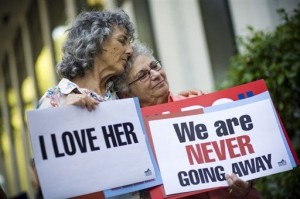 Washington is now step closer to becoming the seventh state in the US to legalize gay marriage. The bill was cleared by a Senate panel called the Government Operations, Tribal Relations & Election Committee yesterday, with a 4 to 3 party-line vote. The committee members voted down several amendments offered by Republicans, including one that would have required the measure be approved by voters in November.

The full Senate will likely vote on the bill next week.

“We thank the Senate committee for quickly passing this important legislation for Washington families,” said Lacey All from Washington United for Marriage. “We’re excited that this bill continues to move toward final passage, and we will not let up until the governor signs it. While we’re happy with today’s vote, we know it is but one battle in the fight for equality, and we will be steadfast in our continued effort to win marriage equality and defend it in November.”

Those in Washington opposed to marriage equality have vowed to put the issue on the November ballot.

In Washington or the surrounding area? Want to get involved in the fight for equal rights? Visit Washington United For Marriage to see how you can help.