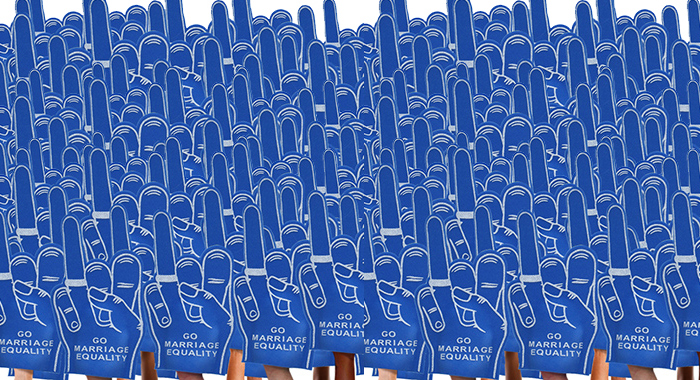 LGBTQ couples want to get married for most of the same reasons that straight couples want to get married: love, rite of passage, and celebration of commitment. However, if the marriage equality debate were just limited to emotions and social mores, it wouldn’t be a civil rights issue. Straight couples get married for love, but they also do it to claim access to (in the U.S.A.) the more than 1,000 legal protections and benefits that come with marriage licenses to safeguard their families and protect themselves. Some of the protections and obligations of marriage in the U.S.A. which were denied to married gay couples included: hospital visitations, child custody, adoption, parenting rights, medical decision-making power, automatic inheritance, standing to sue for wrongful death of a spouse, divorce protections, spousal and child support, access to family insurance policies, exemption from property tax upon death of a spouse, immunity from being forced to testify against one’s spouse, domestic violence protections, and more. On 26 June 2013 the Defense of Marriage Act (DOMA), which excluded married gay couples from 1,138 federal protections and rights, was overturned and the Respect for Marriage Act (RFMA) was proposed. By 2014, 17 States, Washington D.C. and 8 Native American tribes had adopted full equality. And on June 26, 2015, same-sex marriage was declared legal nationwide when the United States Supreme Court ruled in Obergefell v. Hodges that state-level bans on same-sex marriage are unconstitutional. The court ruled that the denial of marriage licenses to same-sex couples and the refusal to recognize those marriages performed in other jurisdictions violates the Due Process and the Equal Protection clauses of the Fourteenth Amendment of the United States Constitution. The ruling overturned a precedent, Baker v. Nelson.

Civil and political rights are a class of rights that protect individuals’ freedom from unwarranted infringement by governments and private organizations, and ensure one’s ability to participate in the civil and political life of the state without discrimination or repression. Civil rights include the ensuring of peoples’ physical integrity and safety; protection from discrimination.

Here are just a few of the thousands of rights and protections that were denied to LGBTQ citizens in the USA prior to June 26 2015 and continue to be denied to LGBTQ people all over the word today:

LGBTQ people have been openly struggling and fighting to achieve legal recognition of their relationships for almost half a century.

In most countries, gay marriage is illegal. In fact, there are still many nations in which gay people are arrested and punished, by way of imprisonment or death. Homosexual acts remain punishable by death in Iran, Mauritania, Saudi Arabia, Sudan, United Arab Emirates, Yemen, some parts of Nigeria and Somalia. Gay people are imprisoned for life in; Antigua & Barbuda, Barbados, Bangladesh, Gaza, Guyana, Malaysia, Pakistan, Sierra Leone, Tanzania, Trinidad & Tobago, Uganda.

History of the fight for marriage equality in the USA

In the United States, legal battles for marriage equality began in 1969, when the Metropolitan Community Church performed the nation’s first gay wedding ceremony. It was not legally recognized, and in 1970, the church filed the a lawsuit seeking legal recognition of same-sex marriages. They lost, and with that, the legal fight for marriage equality went quiet for over two decades.

In 1993, the issue of marriage equality moved back into the spotlight, after several gay couples filed a discrimination suit against the state of Hawaii, which had denied their requests for a marriage license. Their claim was that the state had no practical reason to refuse them, and the Supreme Court agreed. It was ruled that the government of Hawaii had to prove that refusing to recognize their relationships was in the best interest of the state, or give them the same rights and benefits as straight couples. The next day, the judge issued a stay on his order.

That stay remained in effect until an amendment to the state constitution effectively banned gay marriages across the nation. In September of 1996, President Bill Clinton signed into law the Defense of Marriage Act (DOMA) which prevented the federal government from recognizing same-sex marriages and dictated that no state must recognize another state’s marriage license if it belongs to a same-sex couple.

This event sparked LGBTQ people to start challenging the law, state by state. In 1997, two gay couples in Vermont brought a lawsuit requesting that their state issue them marriage licenses. In 1999, the state Supreme Court issued a ruling that required Vermont to offer same-sex couples the same rights that heterosexual couples receive through marriage. This was groundbreaking in that it introduced a legal precedent, and in that it established civil unions as an institution.

Almost four years later, Massachusetts became the first state to legalize gay marriage, not just civil unions. Connecticut also ruled in favor of marriage rights for gays in 2008, and since then, New Hampshire, Massachusetts, Vermont and New York have all followed and changed their civil union laws to allow LGBTQ people the right to legally marry.

California brought much media attention to the gay marriage debate when, in 2008, they ruled in favor of gay marriage, but then allowed the issue to become a ballot item to be decided by voters. California voters, heavily influenced by out-of-state religious propaganda ($40 million was spent on anti-gay marriage campaigns,) passed the proposition, effectively allowing the state constitution to ban same-sex marriage. That ballot item was called Proposition 8.

In 2010, the U.S. District Court for Northern California ruled in Perry v. Schwarzenegger that evidence did not show any historical purpose for excluding same-sex couples from marriage, as states have never required spouses to have an ability or willingness to procreate in order to marry. Two years later, on 9 May 2012 President Barack Obama endorsed marriage equality and his support to repeal DOMA, stating that the constitutional bans were unnecessary.

In August 2012, 4 years after it was passed, U.S. District Judge Vaughn Walker ruled Proposition 8 unconstitutional under the Fourteenth Amendment. The ruling was stayed pending appeal from the supporters of the initiative.

On 26 June 2013, the Supreme Court ruled it unconstitutional for the federal government of the United States to deny federal benefits of marriage to married same-sex couples, if it is recognized or performed in a state that allows same-sex marriage.

Finally, on June 26, 2015, the United States Supreme Court ruled in Obergefell v. Hodges that state-level bans on same-sex marriage are unconstitutional. The court ruled that the denial of marriage licenses to same-sex couples and the refusal to recognize those marriages performed in other jurisdictions violates the Due Process and the Equal Protection clauses of the Fourteenth Amendment of the United States Constitution. The ruling overturned a precedent, Baker v. Nelson.