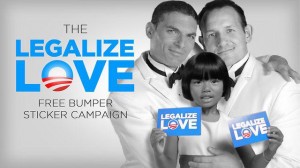 A new pro-equality movement is hoping to distribute 100,000 pro-Obama bumper stickers before the presidential election to gain momentum for marriage equality.

Legalize Love has the same name as Google’s newly launched campaign and wholly supports Obama, but it’s not affiliated with either. The group is an “independent pro-equality movement” who say reelecting Obama is the country’s best chance at gaining marriage equality in the United States.

“Together we will show voters across the country that 2012 is the time to ‘Legalize Love,’” reads their website. “The presidential election is our best, most visible chance to build support for equal marriage rights in the United States. Having a president who believes in equal rights is an opportunity to change laws – and hearts – all across the nation. Let’s seize this moment. Let’s make history.”

The group is giving away marriage equality stickers – while they’re still in stock – and also selling tons of other fundraising merchandise. Sign up for your free sticker here.