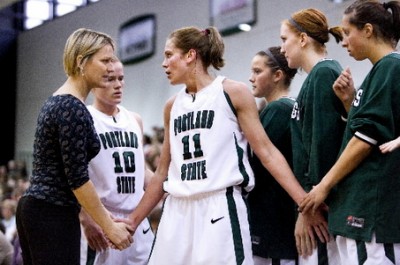 Forty years have passed since Title IX officially ended sex discrimination in federally funded American sports programs. But in a recent ESPN article, female coaches reflected on their declining representation in college sports and the appalling working conditions they face.

Women hold only 20 percent of the top coaching jobs in college sports, and while men often fill women’s team positions, women cannot apply to coach men’s teams. The fact that men can coach women but women are excluded from men’s sports is a phenomenon researchers call “The Glass Wall.”

While sexism is a persistent and growing problem in college sports, homophobia is an even more serious issue. Since the passing of Title IX, most female coaches have stayed closeted out of fear of losing their recruits, or even their jobs. Negative recruiting, in which coaches tell parents and prospective athletes that competing teams are coached by lesbians, discourages both coaches and athletes from being open about their sexuality.

As a result, there is only one out lesbian coach in Division I basketball: Sherri Murrell, of Portland State. In a 2011 interview, Murrell characterized the widespread fear that a gay coach will turn her players gay as “absurd,” and added that she faces “fear of losing the job, and fear of being ostracized by fans or boosters.” She said the experience of coming out was frightening, as she is still the only out lesbian in her field, but that she can now “live in comfort cause I’m being myself.”

The homophobic culture of women’s college sports also discourages many athletes from playing at the college level. Two former college stars, Sue Wicks and Abby Conklin, told ESPN in 2011 that homophobia continues to overshadow the world of college athletics. Former WNBA player Kate Starbird added that she feels she could never become a coach because she refuses to be closeted. “I didn’t want to live my life that way,” she explained.