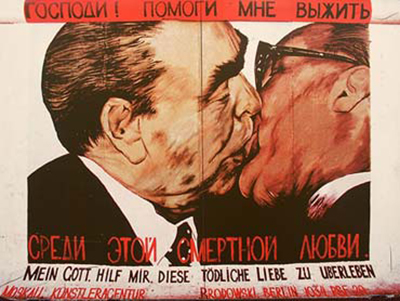 Printed in the NY Times March 5, 2013
by Chris Cottrell

BERLIN — Klaus Born vividly recalls his first brush with the law, which took place along a quiet street in West Berlin in the 1960s, when being gay carried a prison sentence on both sides of the Berlin Wall.

Mr. Born and another man had driven to a dark parking lot and crawled into the back seat. Once they began having sex, they saw bright flashlights and heard brusque voices as they were surrounded. A police car was idling nearby, ready to take them away.

“I was terrified. I had no idea what they were going to do to me,” said Mr. Born, 68, who spent a little over a month in prison after the episode. “ ‘Gay pig,’ they always used to say.” 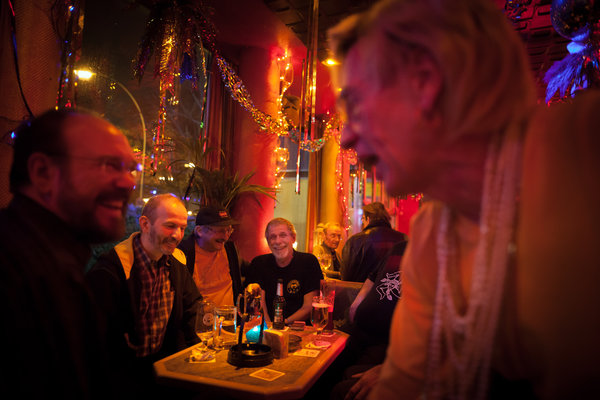 Klaus Born, in black T-shirt, center, at a Berlin gay bar. He views his conviction in the 1960s as a moral affront and a legal stigma. Photo by Gordon Welters for the NY Times

According to the law, his conviction still stands, which Mr. Born considers a moral affront and a legal stigma that hurts to this day.

Germany’s failure to expunge the arrests of victims of a legal system that kept a Nazi-era ban on homosexuality on the books for decades after World War II is indicative of the slow pace of reforms on gay equality, despite a generally liberal populace.

The country’s foreign minister and the mayor of Berlin are both openly gay, and the Federal Constitutional Court has set multiple precedents to strengthening gay rights under the Basic Law, Germany’s Constitution, most recently by expanding adoption rights for same-sex couples. But the dominant party here, Chancellor Angela Merkel’s Christian Democrats, and its Bavarian sister party, the Christian Social Union, long champions of traditional family values, still drag their feet when it comes to gay equality.

When leading members of Ms. Merkel’s party went on the record last month saying they were ready to consider equal tax benefits for gay couples, their comments drew swift criticism from the party’s socially conservative wing.

Yet with a general election approaching in September, Ms. Merkel appears aware that a shift to the left on gay issues, similar to left-of-center stances she has taken on military conscription and the minimum wage, could undercut her opponents’ campaign by giving them one less thing to criticize. So there may yet be a further move before the election to clear the records of gays persecuted in the past.

Men who were forced to wear the pink triangle, the Nazis’ way of identifying homosexuals in concentration camps, received a measure of justice in 2002 when the German government formally apologized and agreed to compensate them. In 2008, Berlin unveiled a memorial for the Holocaust’s gay victims, a tall concrete slab with a TV screen on one side that displays a video loop of two men or two women kissing.

But victims of Germany’s postwar homophobia have received only modest redress. Parliament officially apologized to them in 2000, but roughly 50,000 men persecuted after World War II have yet to have convictions of sodomy stricken from their police records, according to Manfred Bruns, a retired federal prosecutor and an executive board member at the Lesbian and Gay Federation in Germany.

No one seems to know how many of those people are still alive, or if they would come forward to seek redress. But calls are growing for Germany to clear the records of remaining victims before they die. Volker Beck, a lawmaker with the opposition Greens and a proponent of gay rights, is one of several members of Parliament who are pushing for legislation that would expunge the records and perhaps offer financial compensation.

“For a lot of these men, criminal persecution in the ’50s spelled disaster for their entire civil existence,” he said.

The road to a cleared record is bumpy still. In particular, a 1957 decision from the Constitutional Court declared the homophobic law, better known as Paragraph 175, to be constitutional, solidifying its place in West German law. The law’s scope was limited in 1969, but homosexuality was not formally decriminalized until 1994.

To clear the victims’ records, Parliament would effectively have to overrule that 1957 Constitutional Court finding — an especially contentious move in a country where there is deep respect for judicial authority. There is also debate over whether Parliament has the power to effectively overrule court decisions that were made in a very different era.

“In the 1950s and ’60s West Germany viewed itself as a Christian, Occidental society rather than a pluralistic one,” noted Mr. Bruns.

To date, Germany has expunged the records only of people caught up in the draconian legal systems of Nazism and East German Communism. “There is no mechanism for getting rid of old Constitutional Court decisions,” Mr. Bruns said. “When the court’s view of the law changes, then it simply rules accordingly and old verdicts are paved over.”

An important hearing before a parliamentary committee in May could determine whether a law is passed or even drafted by September.

Mr. Born said he just wants his record cleared before he dies.

Sitting in his ground-floor apartment here, surrounded by souvenirs from decades of travel, Mr. Born flipped through a dusty album until he came to an old photograph of himself clad in black leather from head to toe and beaming at the camera. He treasures his keepsakes from years ago, when his partner, Jürgen, was still alive.

“It’s not about the money. No one cares about that,” Mr. Born said. “These convictions hurt people.”

In 2001 Germany  began recognizing civil unions for gay and lesbian couples, though LGBT Germans do not have equality despite the fact that roughly 75% of Germans support same-sex marriage. In February of this year, the Federal Constitutional Court ruled that gays and lesbians should have the right to adopt children already adopted by their partners and tax benefits for civil unions is currently being debated. Gay rights will be a significant campaign issue in Germany’s parliamentary elections this year.