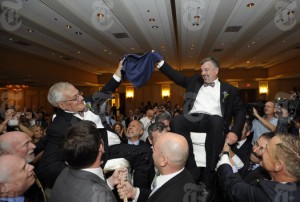 Frank was already esteemed for being the first congressman ever to come out voluntarily. In addition, his marriage makes him the first sitting congressman to marry a person of the same sex. Massachusetts governor Deval Patrick officiated the wedding and approximately 300 friends and colleagues attended.

NBC reported the ceremony truly took on a Frank-like sense of humor when Patrick mentioned that Frank and Ready had vowed to love each other “through Democratic and Republican administrations alike.”

Congratulations to the happy couple!