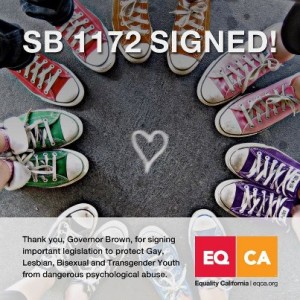 SB 1172 was co-sponsored by national and state LGBT and mental health advocacy organizations including NCLR, Equality California, Lambda Legal and Mental Health America of Northern California. More than 50,000 people signed an online petition in about a week’s time urging Gov. Brown to sign the bill. The law will go into effect January 1 and is the first of its kind for any state.

Though its name would suggest otherwise, reparative therapy lacks real medical backing and has been found to increase depression and suicidal thoughts among LGBT youth. In April, Dr. Robert Spitzer, who authored a famous study in 2001 in support of reparative therapy, essentially revoked his study and admitted that critics of his findings were generally correct.

The Human Rights Campaign released the following statement about SB 1172:

“We’re grateful to Governor Brown for standing with California’s children. LGBT youth will now be protected from a practice that has not only been debunked as junk science, but has been proven to have drastically negative effects on their well-being. We commend Governor Brown for putting children first, and call on all states to take California’s lead on this issue. We will continue our fight against this kind of child abuse, which has been deemed harmful to children by all major mental health, medical, and child welfare organizations.”