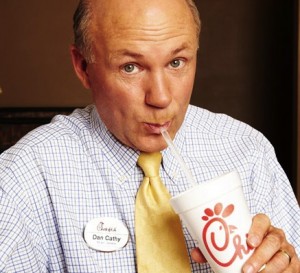 For years, fast-food chain Chick-fil-A has donated millions of dollars to anti-gay organizations like the Family Research Council and Exodus International, all the while denying any homophobia in the organization. Finally, their president has come clean about the restaurant’s anti-gay stance.

Even when it became publicly known that the restaurant had donated millions of dollars to hate groups in 2009 and 2010, Chick-fil-A president Dan Cathy refused to acknowledge that the restaurant, which was founded on “Biblical values,” had any anti-gay affiliations.

“We have a whole spectrum of team members that work with us who are part of the gay and lesbian community,” Cathy said last year. “They know as employees of Chick-fil-A that they are welcomed, they are embraced, and they are part of the Chick-fil-A family. So to be identified with some sort of hate group that has a political agenda — that is not Chick-fil-A at all.”

But in an interview that rocked media this week, Cathy was asked upfront if his restaurant opposed marriage equality. His response? “Guilty as charged.”

In an interview with the Ken Coleman Show, Cathy said, “I think we are inviting God’s judgment on our nation when we shake our fist at him and say, ‘We know better than you as to what constitutes a marriage.’ And I pray God’s mercy on our generation that has such a prideful, arrogant attitude to think that we have the audacity to define what marriage is about.”