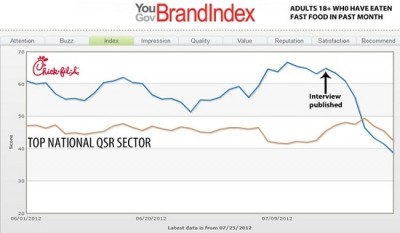 It’s been a rough couple of weeks for Chick-fil-A.

First, news about the restaurant’s hefty donations toward anti-gay groups resurfaced. Then president Dan Cathy said the organization opposes marriage equality. Since then, companies, cities and celebrities have been denouncing and cutting their ties to the chain right and left.

And it shows. The polling organization YouGov found that the company’s consumer brand health – essentially, its popularity – has dropped to its lowest levels in nearly two years, sinking below the average for top fast food chains.

According to BrandIndex, “On July 16th, the day the Baptist Press published its Dan Cathy interview, Chick-Fil-A’s Index score was 65, a very substantial 19 points above the Top National QSR Sector average score that day of 46.”

We hate to say we told you so. (Not really.)