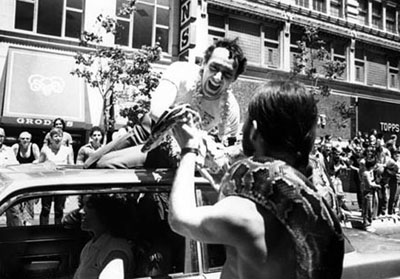 A proposal to rename the San Francisco International Airport in honor of Harvey Milk, is going to go before voters on the November 5 ballot if a measure introduced yesterday by Supervisor David Campos is approved by the Board of Supervisors.

“It’s about time that an out gay person was recognized on this international scale,” state Assemblyman Tom Ammiano said in a statement released by Campos’s office.

Harvey Milk San Francisco International Airport would be the first airport named after an openly gay person in America. Harvey Milk, a Revel and Riot role model, was San Francisco City Supervisors, the first openly gay man elected to public office in U.S. history. He was assassinated along with Mayor George Moscone in 1978 by former Supervisor Dan White.

Stuart Milk, Harvey’s nephew and co-founder of the Harvey Milk foundation, said in a statement that he hopes to see support for an action he said will have “huge, huge implications” worldwide. “When you think of the 9 million international visitors, coming from many of the 77 countries where it’s still illegal to be LGBT – people forget that there are still 77 countries where it’s criminal to be who you are,” he said. “To be in Dubai, and see on the board a flight that ends at Harvey Milk San Francisco International Airport, or to be a young Pakistani, in a country where it is illegal to be gay, look up and see the name of a gay icon and feel, ‘I am not alone’ – it resonates back to my uncle and the calls he got from places like Altoona, Pa., when he was elected.”