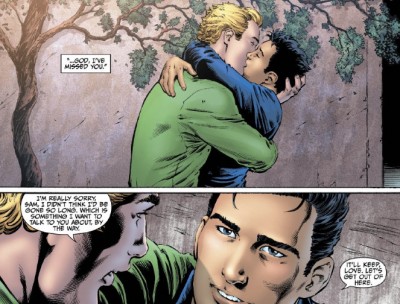 Green Lantern has been a DC Comics superhero legend for over 70 years, and with the latest version of him, the comic creator has taken a bold step. The new Green Lantern is gay. For you comic book fans, this new hero is not the original character – Hal Jordan. In DC Comics’ “Earth 2,” Alan Scott is a totally new Green Lantern.

“This was my idea,” writer James Robinson explained, “He doesn’t come out. He’s gay when we see him in issue two… He’s fearless and he’s honest to the point where he realized he was gay and he said, ‘I’m gay’.”

Robinson went on to say that “presenting that kind of a heroic role model hopefully will be a good thing and help to show gays in a positive light for people who might be a little more small-minded,” he said.

“What I really want to do with this character is make the fact that he’s gay to be a part of who he is and not to be the one identifying aspect of him … and have his humor and his bravery be as much or more a part of him as his sexuality.

“I hope he’s a positive figure. If there’s some kind of kid out there who’s reading the comic and who’s worried about the person he is, maybe it will give him a positive sense of who he is. Or maybe a different kid will read it and decide I don’t need to bully some kind of kid in school.”