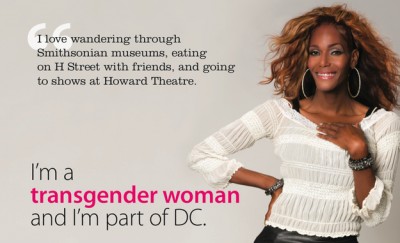 The government of Washington, D.C. this week launched a campaign calling for respecting D.C.’s transgender and gender-non-conforming communities.

Discrimination based on gender identity and expression is illegal in D.C. The campaign is meant in part to draw attention to D.C.’s anti-discrimination law, as well as to combat a string of anti-trans violence in recent years.

The woman featured in the ad above is named Kisha. The ad reads, “I love wandering through Smithsonian museums, eating on H Street with friends, and going to shows at Howard Theatre.” Then, the central message: “I’m a transgender woman and I’m part of DC. Please treat me the way any woman would want to be treated: with courtesy and respect.”

“I believe in the message. I believe in equality for everybody, all over the world,” Kisha told Buzzfeed. “I think it’s going to have a great impact. The fact that it is going to be right there in your face. People will see transgender people. They’re going through everyday life, everyday struggles — the same as straight people, rich people, everyone. Getting the message out there … is going to be great.”