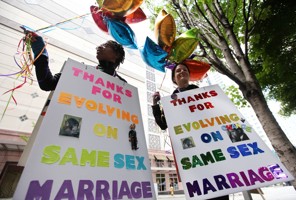 The Democratic Party has decided to make marriage equality an official plank of its campaign platform. A spokesman for the Democratic National Committee said earlier this week that the DNC’s drafting committee had voted to add the party’s official support for gay marriage. Delegates are expected to approve the platform during the fall Democratic convention in North Carolina.

LGBT organizations are thrilled with the Democratic Party’s vote.

“Like Americans from all walks of life, the Democratic Party has recognised that committed and loving gay and lesbian couples deserve the right to have their relationships respected as equal under the law,” said Chad Griffin, the president of the Human Rights Campaign. “I believe that one day very soon the platforms of both major parties will include similar language on this issue.”

“This is a historic move by the Democratic Party that places it squarely on the right side of history, alongside President Obama,” said Rick Jacobs, founder of the Courage Campaign. “For the first time, a major U.S. political party has embraced gay and lesbian people as full Americans.”

Of course, anti-gay organizations like the National Organization for Marriage also rang in on the decision, saying, “if the DNC gets its way, the marriage amendments adopted in Ohio, Virginia, Florida, Colorado, Nevada and elsewhere will be overturned. That makes the definition of marriage a key issue in these swing states, and we fully intend to make sure that people realize that the outcome of the election is a proxy for the survival of traditional marriage in our nation.”

All of this indicates that this will be a major campaign issue for the upcoming election.