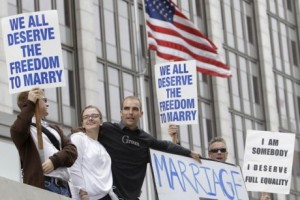 Once again, the Defense of Marriage Act has been ruled unconstitutional.

In a challenge brought on by married same-sex couples who were denied federal benefits because their spouses were of the same sex, Judge Vanessa Bryant, a George W. Bush appointee, ruled that a section of DOMA was unconstitutional for denying equal protections guarantees.

The judge concluded that, “the Court finds that no conceivable rational basis exists for the provision. The provision therefore violates the equal protection principles incorporated in the Fifth Amendment to the United States Constitution.”

This brings the total to one appellate court, five district courts, and one bankruptcy court that have all found DOMA unconstitutional in some way. Anyone else see a pattern?