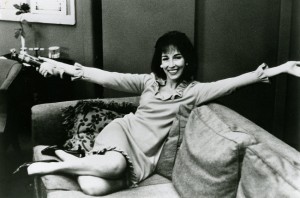 Helen Gurley Brown, a feminist journalist who was an early and prominent voice for women’s sexual liberation, died this week in New York. She was 90.

Brown was best known as the longtime editor-in-chief of Cosmopolitan magazine who was committed to the ideas of women’s liberation and freedom, from careers to relationships to sex. She also wrote several books on these topics throughout her life.

Regarding Brown’s fire for her own kind of feminism, the Guardian’s Jennifer Scanlon wrote in 2009:

“She actively worked for the equal rights amendment, which would have constitutionally guaranteed women in the US rights equal to those of men, and for reproductive rights, including abortion. She looked for opportunities to promote the practical changes endorsed by more political feminists, but still maintained that her women had to play the system as best they could. Brown advocated work (not men) as women’s greatest ally, but she also understood the limitations of the work world just as she understood the limitations of men.”

As one Huffington Post user wrote in a comment, “Conservative women disliked her. Some feminists didn’t like her either. That means that she did her job very well.”