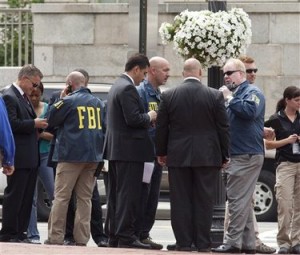 Conservatives and gay rights groups alike are furious after a shooting at the conservative Family Research Council in Washington, D.C.

28-year-old Floyd Lee Corkins entered FRC’s headquarters Wednesday morning and shot a guard in the arm after making comments opposing FRC’s anti-gay values. The guard, Leo Johnson, was able to wrestle the gun from Corkins and detain him until police arrived. He was treated at a hospital and is reportedly doing well. The shooter is in custody.

After the shooting, more than 20 LGBT advocacy groups including GLAAD, HRC, PFLAG, The Trevor Project and Freedom to Marry released a joint statement denouncing violence and standing in solidarity with the victim. The Southern Poverty Law Center also issued a statement immediately, but right-wing organizations have said the SPLC is to blame for the shooting because they have previously labeled the Family Research Council a hate group.

“Today’s attack is the clearest sign we’ve seen that labeling pro-marriage groups as ‘hateful’ must end,” said Brian Brown, president of the anti-gay National Organization for Marriage, in a statement. “The Southern Poverty Law Center has labeled the Family Research Council a ‘hate group’ for its pro-marriage views, and less than a day ago the Human Rights Campaign issued a statement calling FRC a ‘hate group’—they even specified that FRC hosts events in Washington, DC, where today’s attack took place.”

The SPLC responded to Brown’s and other conservatives’ claims with a statement of its own (read the full thing here):

“This afternoon, FRC President Tony Perkins attacked the SPLC, saying it had encouraged and enabled the attack by labeling the FRC a ‘hate group.’ The attacker, Floyd Corkins, ‘was given a license to shoot an unarmed man by organizations like the Southern Poverty Law Center,’ Perkins said. ‘I believe the Southern Poverty Law Center should be held accountable for their reckless use of terminology.’

Perkins’ accusation is outrageous. The SPLC has listed the FRC as a hate group since 2010 because it has knowingly spread false and denigrating propaganda about LGBT people — not, as some claim, because it opposes same-sex marriage. The FRC and its allies on the religious right are saying, in effect, that offering legitimate and fact-based criticism in a democratic society is tantamount to suggesting that the objects of criticism should be the targets of criminal violence.”