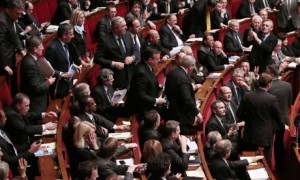 Gay marriage in France, under Francois Hollande’s presidency, is now closer to becoming legal this week, as the National Assembly approved a draft law. The measure was pushed through the Assembly with a vote of 329 to 229.

Leader of the Socialist MPs in the Assembly, Bruno Le Roux said: “We won’t judge people in terms of their sexual orientation by differentiating any more. It’s one fewer difference to be made, so it really is a great day for equal rights.”

“This law is going to extend to all families the protections guaranteed by the institution of marriage.” Prime Minister Jean-Marc Ayrault said ahead of yesterday’s vote.

Opposition to the law is still strong from conservatives in France, whose population is predominantly Catholic. The bill will now head to the senate, which is also dominated by the Socialist party.