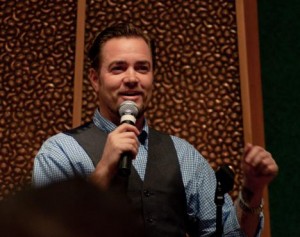 In a recent interview with the Cliks’ Lucas Silveira, FTM comedian (and a Revel and Riot role model) Ian Harvie discussed labels and his trans identity. “I spent so long as a kid being a masculine kid,” Harvie said, “and then identifying as a dyke and then coming out as trans and identifying as a man and you know, stud and daddy and top and there’s lot of things, and I just collect them all and put them all sort of together and I don’t feel like I have to give up any one of them. And I may not appear as a dyke to the world, but I definitely feel that that is a huge part of my history, and I’m not giving up my history.”

Harvie explained that being socialized as a girl taught him how to “act proper” and to keep himself safe in threatening situations. While he relates to the label FTM, he doesn’t identify as male. Harvey added that he believes all of us are “a little bit trans,” and no one is completely settled in their gender identity.

In his comedy show, Harvie jokes that he doesn’t really feel that he was born in the wrong body, but settles on this trans narrative so that people who “aren’t bright” can understand. He modified his body not so he could live in the ‘correct’ shell, but so he could pee his name in the snow.

Harvie maintains his female status on his identity cards, as he considers female to be a biological category and a legal term that has nothing to do with his gender identity. To his critics in the trans community, Harvey insists that he is the only one who can define his gender and that the subject isn’t up for public discussion.

Harvey acknowledged that the word ‘tranny’ can be “hurtful to some people’s ears,” and has historically been used mainly against trans women. But he supports its reclamation because he believes that using it positively takes its power away from those who would use it as an insult.

Harvie recently performed at The Flying Beaver Pubaret in Toronto, at a benefit for the Church Street Community Center’s Trans Youth Toronto program.

Link to the interview with Ian Harvie.