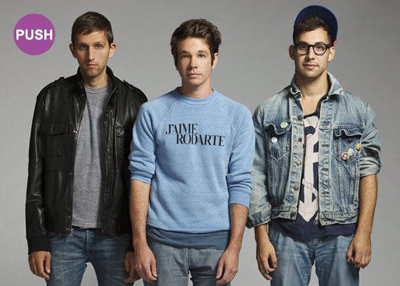 The band Fun. has been sporting and supporting Revel & Riot on their current massive North American tour! We are so honored that these amazing guys have not only worn our stuff in NYLON magazine and for MTV, and talked about us in their cover interview with Billboard Magazine, but they have been continuing to speak out about LGBTQ rights and equality in a truly meaningful way – the band sets an example for allies everywhere. 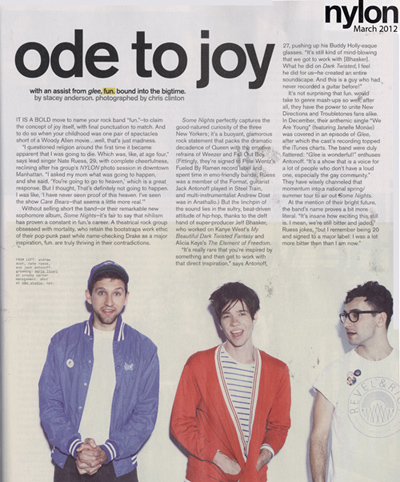 Our facebook contest to win tickets to see Fun. is still happening, so check out our facebook page for more details. All you have to do is let us know why you’re an excellent LGBTQ individual or ally to the LGBTQ community.

From the article in Billboard Magazine:
The Rights Stuff – by T. Cole Rachel

When fun. hits the road this spring in support of Some Nights, the band will have a unique partner onboard: Revel & Riot – an organization that promotes rights, awareness and equality for the lesbian, gay, bisexual, transgender and queer (LGBTQ) community, through new media, graphics, writing and products on the internet. Revel & Riot, approached by the band for a collaboration, will create special marriage equality t-shirts for fun. to sell on the road (benefiting the Gay-Straight Alliance Network).

“Besides being an incredible band, they are outspoken and dedicated allies to the LGBTQ community,” Revel & Riot posted on its website of the decision to partner with fun. “We couldn’t feel more lucky to have such wonderful allies and friends.”

Such partnerships with political and social activist groups are certainly nothing new, particularly when it comes to tour support. In recent years artists like Lady Gaga and Cyndi Lauper have used national tours as promotional platforms and fund-raising opportunities for LGBTQ organizations and HIV/AIDS charities (Gaga for her Born This Way Foundation and Lauper for the Human Rights Campaign). What makes the partnership between fun and Revel & Riot notable though, is that the band isn’t specificall gay, but rather a group of stright indie-rock guys who have embraced the LGBTQ audience.

In addition to the Revel & Riot partnership and fun.’s special “It’s all fun. and gay ’till someone loses their rights” T-shirts, guitarist Jack Antonoff is contributing “straight ally” columnist the the Huffington Post’s Gay Voices site. All proceeds from the shirt sales go to charity, but raising money isn’t the No. 1 goal – raising awareness is.

“[This is] one of these strange transitional times in history where doing nothing is an endorsement for inequality in itself,” Antonoff says. “As a band, we fully realize this and feel passionate about using whatever platform we have to not only bring more light to this issue, but to also make it clear that fun. shows are a place for all people. We want the LGBTQ community to know that although their government may treat them as second-class citizens, we do not. We will also do everything in our power to help end this monumental injustice in any way we can.”