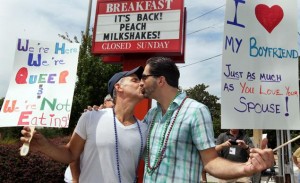 Two days later, gay rights activists had something else in mind.

Activists created their own counter-protest to Huckabee’s day of deep-fried solidarity by declaring last Friday Same-Sex Kiss Day at Chick-fil-A. Same-sex couples were invited to come out to Chick-fil-A, not spend a dime, and give the restaurant’s customers a public display of affection. Plenty of people accepted the challenge.

The Advocate collected an array of photos from couples here and there’s an entire blog devoted to pictures of anti-Chick-fil-A kissing here. Now there’s a Chick-fil-A demonstration we can support.