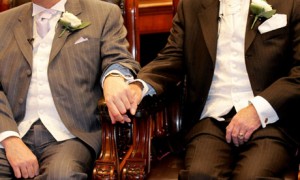 Earlier today the British House of Commons passed a bill that legalizes gay marriage. It passed with a large majority of the vote of 400 to 175, as Prime Minister David Cameron (who supports the bill) directed MPs to vote according to their conscience rather than under party orders.

The new law proposes legalising same-sex marriage in England and Wales in 2014. It would also allow civil partners to convert their partnerships into marriages. A YouGov poll for the Sunday Times in London last week showed 55% approved of legalising gay marriage, while 36% opposed it.