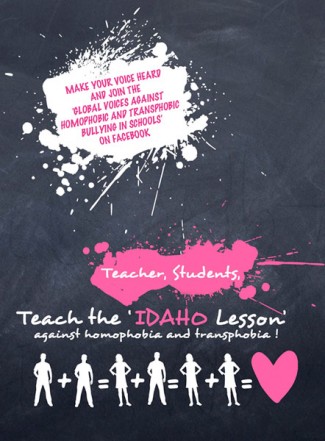 This May 17th marks another year of recognizing the International Day Against Homophobia and Transphobia – which is also referred to as IDAHO. Organized by the Paris-based “IDAHO Committee,” founded and presided by French academic Louis-Georges Tin, this is a day in which we see events planned all over the world to increase support for LGBT rights.

May 17 was chosen as the day of the event because it is also the day that homosexuality was removed from the International Classification of Diseases of the World Health Organization in 1990.

The latest report that the International Lesbian, Gay, Bisexual, Transgender and Intersex Association, ILGA, released on the International Day against Homophobia and Transphobia 2009, confirms that no less than 80 countries around the world still consider homosexuality illegal, and that in 7 of them, homosexual acts are punishable by death. In almost all countries, transphobic laws limit the freedom not to act as socially determined by one person’s sex at birth.

Visit http://www.dayagainsthomophobia.org/ to see how you can get involved. Not just on May 17th, but every day of the year.