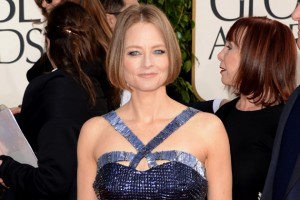 Jodie Foster, who has staunchly guarded her private life for four decades, was awarded the Cecille B. Demille Award for Lifetime Achievement last night at the Golden Globes, and during her acceptance speech, came as close as she likely ever will to officially outing herself.

“I guess I have a sudden urge to say something that I’ve never been able to air in public that I’m a little nervous about,” Foster said, “But maybe not as nervous as my publicist. “So I’m just going to put it out there, loud and proud. I’m going to need your support on this. I am… single.”

“I already did my coming out a thousand years ago, in the Stone Age, those very quaint days when a fragile young girl would open up to friends and family and co-workers then gradually to everyone that knew her, everyone she actually met. But now apparently I’m told that every celebrity is to honor the details of their private life with a press conference, a fragrance and a primetime reality show.”

“If you had been a public figure from the time that you were a toddler … then maybe you too might value privacy above all else. I have given everything up there from the time I was three years old, that’s reality show enough, do you think?”

She went on to say, in regards to her longtime partner “There’s no way I could ever stand here without acknowledging one of the deepest loves of my life. My heroic co-parent, my ex-partner in love but righteous soul sister in life, my confessor, ski buddy, consiglieri, most beloved BFF of 20 years, Cydney Bernard.”

GLAAD President Herndon Graddick released a statement shortly after Foster’s speech, saying “When one of the most critically-praised actresses speaks about her identity and relationships on one of the largest stages in the world, it shows just how much the tide has turned. Given Jodie Foster’s lifetime of achievements, this is a significant moment for LGBT visibility. As more and more high-profile LGBT people like Jodie speak openly, those who do not accept LGBT people will continue to fall behind the times.”