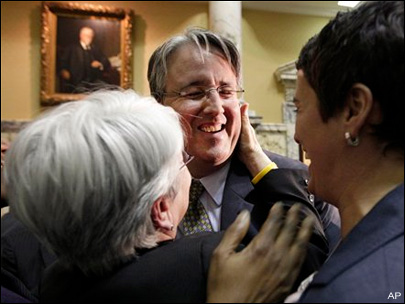 Gay marriage is almost legal in the state of Maryland now that the legislature in the Senate voted 25-22 in favor of the law. The bill now goes to the desk of Gov. Martin O’Malley, who said he will sign it into law.

Maryland will be the eighth state to legalize gay marriage when O’Malley signs the bill. “This issue has taken a lot of energy, as well it should, and I’m very proud of the House of Delegates and also the Senate for resolving this issue on the side of human dignity, and I look forward to signing the bill,’’ Gov. O’Malley said.

Naturally, those against equality in the state have said that they will fight to bring the issue to referendum in November, by collecting enough signatures. This will mean that the measure will be placed on a ballot and the be voted on by the people of Maryland – again, a case of the majority unfairly voting on the rights of the minority.

According to polls in the state, more Maryland residents have told Washington Post pollsters that they support gay marriage; 50% said they favored passing the law while 44% were opposed.