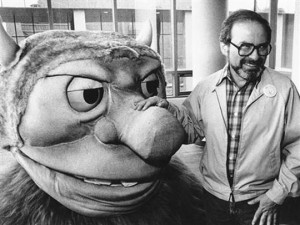 Author Neil Gaiman said this about Maurice Sendak, the legendary children’s author who passed away this week at the age of 83. “He was unique, grumpy, brilliant, gay, wise, magical and made the world better by creating art in it.”

In a 2008 interview with the New York Times, Sendak was asked whether there was anything he had never been asked about. He paused then answered, “Well, that I’m gay. I just didn’t think it was anybody’s business.”

Maurice Sendak lived with his partner Eugene Glynn, a psychoanalyst, for 50 years before Dr. Glynn’s death in May 2007. He never told his parents, something he later regretted: “All I wanted was to be straight so my parents could be happy. They never, never, never knew.”

Sendak wrote and illustrated more than a dozen picture books, most famously “Where the Wild Things Are,” which was published by Harper & Row in 1963.