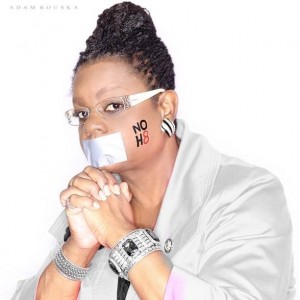 In honor of National Coming Out Day, Adam Bouska’s NOH8 Campaign released the photos of 26 more members of Congress who participated in the campaign’s second “NOH8 on the Hill” photo session.

Originally created as a response to California’s Proposition 8, the NOH8 campaign photographs LGBT rights allies and advocates with the iconic “NOH8” logo written on their face. More than 20,000 people, including celebrities from Kathy Griffin to Kourtney Kardashian, have posed for the campaign. After the latest effort to include the faces of politicians, elected officials from 15 states are represented as well.

Buzzfeed has compiled photos of the now 37 members of Congress who have posed for Bouska’s viral campaign, including some of their statements about LGBT equality. Rep. Gwen Moore of Wisconsin, pictured above, had the following to say:

“Love is love. Whether heterosexual, homosexual, bisexual or transgender, no one should be denied the opportunity to express this love through marriage. I stand strong in my support of the LGBT community and marriage equality.”