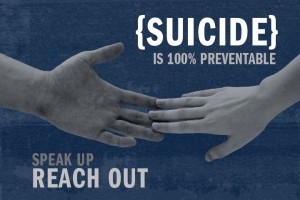 For one thing, the strategy specifies that LGBT people may be at a higher risk of suicide not because of their sexual orientation or gender identity, but because of cultural stigma and discrimination. For LGBT youth, there may also be a case of contagion when media unknowingly covers youth suicide as if it were a natural response to bullying.

“A meta-analysis of 25 international population-based studies found the lifetime prevalence of suicide attempts in gay and bisexual male adolescents and adults was four times that of comparable heterosexual males,” the strategy states. “Lifetime suicide attempt rates among lesbian and bisexual females were almost twice those of heterosexual females.”

To combat LGBT suicide, the strategy advocates for incorporating suicide prevention into health care, access to LGBT-affirming mental health resources, and ending bullying and discriminatory laws. The Trevor Project also recently launched ‘Talk to Me,’ a campaign encouraging people to be vocal about supporting one another. For more info on LGBT suicide prevention, have a look at our page on the subject.