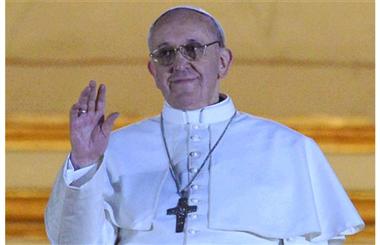 The new pope, 76-year old Jorge Mario Bergoglio (who has chosen the name Francis I) was today named as the 266th pontiff of the Roman Catholic Church. He’s also the first non-European leader of the church in more than 1,200 years and before today had been the archbishop of Buenos Aires, Argentina.

While Archbishop, Bergoglio sent a missive to monasteries denouncing a bill that had brought marriage equality to Argentina, saying: “Let’s not be naive, we’re not talking about a simple political battle; it is a destructive pretension against the plan of God. We are not talking about a mere bill, but rather a machination of the Father of Lies that seeks to confuse and deceive the children of God.”

Bergoglio has also called allowing gays to adopt a form of child abuse. He once called abortion a “death sentence” for unborn children, and has urged pro-life “messengers” to continue their fight against the “culture of death”.

Just as a quick reminder of what the Catholic Church is most famous for these days; from 1960 to 2010, more than 30,000 people in 25 countries have come forward and accused priests of molestation. It is estimated that at least 1 out of every 15 Roman Catholic priests serving in the United States during the first half of the 20th Century abused minors. Neuro-scientist Sam Harris has described the church as harboring an “army of child rapists”.