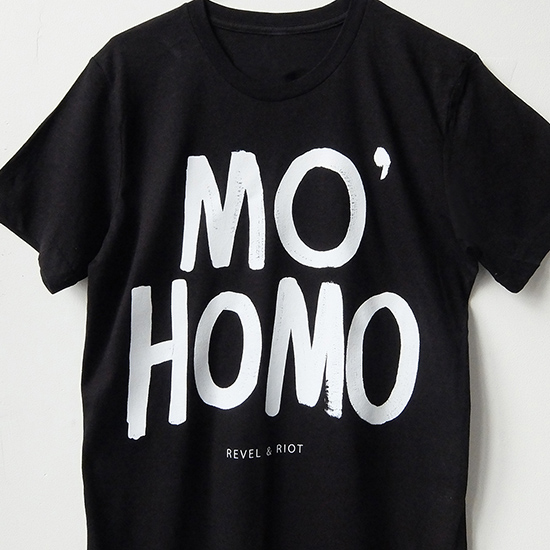 The first – available here as a t-shirt, sleeveless tee, and a tank – is Mo’ Homo (short for MORE Homosexual). It’s a defiantly positive slogan, twisting around the homophobic slang “No Homo.” “No Homo” has been in use since the early 1990s, credited to Harlem rapper Cam’ron, and gained popularity in the 2000s through artists like Lil’ Wayne. It became a widely used phrase to indicate that the speaker is not a homosexual, nor do they mean something in a homosexual way – in most cases used as punctuation after saying something that could be construed as gay, like a compliment from one man to another.
The Mo’ Homo design is about recognizing the progress that has been made. As LGBTQ visibility has increased, progressive voices have grown louder, and gratuitous homophobic rhetoric has become less and less acceptable. In this case we turn that language on its head and reclaim it for our own pride and amusement. This is a great shirt for LGBTQ people and their allies – especially as a gift for somebody who used to say “no homo” and now regrets it!

And for more background check out Jay Smooth’s very excellent explanation of the history and uses of No Homo. 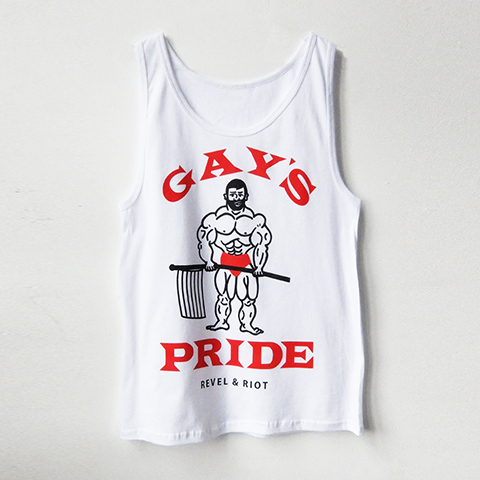 Next, we’ve got the Gay’s Pride tank top, available here in white and blue! Gay pride or LGBT pride is the positive stance against discrimination and violence toward lesbian, gay, bisexual, and transgender (LGBT) people to promote self-affirmation, dignity, equality, increase visibility, build community, and celebrate sexual diversity and gender variance. Pride, as opposed to shame and social stigma, is the predominant outlook that bolsters most LGBT rights movements throughout the world. The Revel & Riot Gay’s Pride design is a fun play on the classic Gold’s Gym tank tops, to honour all the gay men who have topped parade floats and spent countless hours at the gym to look their best doing so.