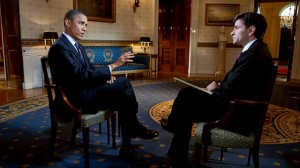 In a new interview, ABC News’ George Stephanopoulos asked Obama if he believes gay marriage should be a right under the Constitution.

“Well, I’ve gotta tell you that — in terms of practical politics, what I’ve seen is a healthy debate taking place state by state, and not every state has the exact same attitudes and cultural mores. And I — you know, my thinking was that this is traditionally a state issue and — that it will work itself out,” he said. “On the other hand — what I also believe is that the core principle that people don’t get discriminated against — that’s one of our core values. And it’s in our Constitution.”

Stephanopoulos then asked whether Obama could imagine a circumstance wherein a state’s gay marriage ban could pass constitutional muster.

“Well, I can’t, personally. I cannot,” Obama responded. “That’s part of the reason I said, ultimately, I think that, same-sex couples should be able to marry. That’s my personal position. And, frankly, that’s the position that’s reflected — in the briefs that we filed — in the Supreme Court.”

The full transcript of the interview is available here.