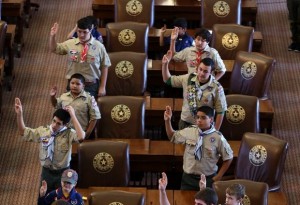 Later this week, the Boy Scouts of America is set to vote on whether to lift the ban on gay members that it had reaffirmed last year. As a private organization, the Scouts are allowed to set their own policies about membership. Several high-profile cases in which openly gay Scouts or Scout masters have been removed from the organization have garnered media attention over the past several years, with many long-term members being removed from the organization. Yesterday, in an interview with CBS anchor Scott Pelley, President Barack Obama gave his opinion on the matter.

Pelley asked the president if he believed that Boy Scouts membership should be open to gay people.

He went on to say:

“My attitude is … that gays and lesbians should have access and opportunity the same way everybody else does, in every institution and walk of life.”

The White House said last summer during the presidential campaign that Obama he opposed the Scouts’ policy of excluding gays as members.

Naturally, several Republicans have already weighed in, including Rick Perry, who said that he hopes “the board will follow their historic position of keeping the Scouts strongly supportive of the values that make Scouting this very important and impactful organization.” In other words, he hopes that the organization will continue to use archaic and bigoted policies in regards to their membership requirements.