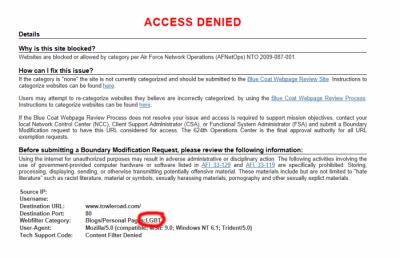 You can finally serve in the US military if you’re openly LGBT, but if you work at the Pentagon, you won’t be able to visit any LGBT news or information sites from your desk. John Aravosis from AmericaBlog recently published an article about how the US Department of Defense has blocked internal computers from accessing a number of websites that are categorized as “LGBT.”

“It’s bad enough the United States Department of Defense censors Towleroad and AMERICAblog – banning the gay civil rights Web sites from being accessed on DOD computers – and it’s even worse that the Pentagon has no problem permitting their computers to access Ann Coulter’s and Rush Limbaugh’s hate-filled Web sites,” Aravosis writes.

Outserve.org, a Don’t Ask, Don’t Tell repeal group has also had it’s website banned, regardless of the fact that the organization has over 4,000 members and is considered “one of the largest LGBT employee resource groups in the world.”

These actions by the Pentagon contradict a statement from Defense Secretary Leon Panetta last year in which he said, “Going forward, I remain committed to removing as many barriers as possible to make America’s military a model of equal opportunity, to ensure all who are qualified can serve in America’s military, and to give every man and woman in uniform the opportunity to rise to their highest potential.”

AmericaBlog also noted that many anti-gay political right-wing sites, such as Rush Limbaugh and Ann Coulter’s sites – were not banned.