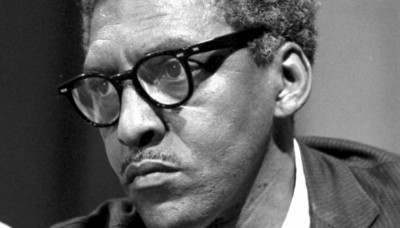 Bayard Rustin, an openly gay man who was also one of the most important figures in the civil rights movement, was born 100 years ago. Rustin was the organizer of the 1963 March on Washington, which was one of the largest nonviolent protests ever held in the United States.

“When an individual is protesting society’s refusal to acknowledge his dignity as a human being, his very act of protest confers dignity on him.” Bayard Rustin

After the passage of the 1964 Civil Rights Act and 1965 Voting Rights Act, Rustin advocated for the civil rights movement and the Democratic Party to work closely together to reach the base among the working class. He was the founder and became the Director of the A. Philip Randolph Institute, which coordinated the AFL-CIO’s work on civil rights and economic justice.

Throughout the 70s and 80s, Rustin worked as a human rights and election monitor for Freedom House. He also testified on behalf of New York State’s Gay Rights Bill. In 1986, he gave a speech “The New Ni**ers Are Gays,” in which he asserted,

“Today, blacks are no longer the litmus paper or the barometer of social change. Blacks are in every segment of society and there are laws that help to protect them from racial discrimination. The new “ni**ers” are gays. . . . It is in this sense that gay people are the new barometer for social change. . . . The question of social change should be framed with the most vulnerable group in mind: gay people.”